(TIP!: The format for the in-browser game is improperly squished, and may not work for some monitors! Try fullscreen mode, or download the game for the best playability!)

Hopper's Bugs is a 2D pixel art platformer, where you play as Jo Hopper, an Entomologist (bug scientist), who is getting ready for the annual Bug Off! Conference.

But before Jo can go to the conference and show off his bugs, it looks like there is a mischievous computer glitch on his laptop, and it has released all of the bugs out of their jars!

Jo needs to re-capture all of his bugs and get them back in their jars in time for the conference! Jump, crawl, and run to catch bugs in the lab and forest!

Be on the lookout for the "Gracehopper," a beautiful golden grasshopper that Jo named in honor of real-life computer scientist Grace Hopper!

HOW TO INSTALL & PLAY

About the Development Team!

Hopper’s Bugs is a collaborative effort by a team of four, who came together to create a game for the GitHub and Lee Reilly, Game Off 2021, game jam!

Playtesters: Undyne and several others. 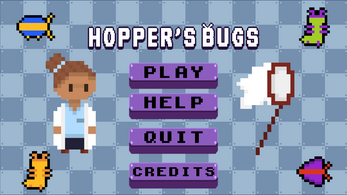 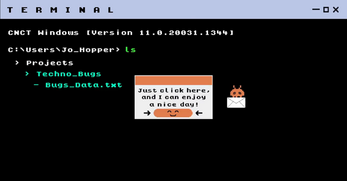 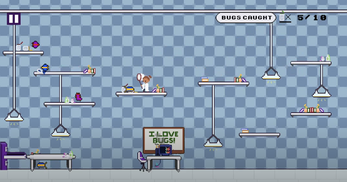